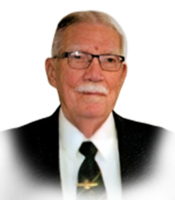 Milks, Charles “Chuck” On Tuesday, April 26, 2022 Chuck Milks completed his life’s journey. Charles (Chuck) Lawrence Milks started his voyage when he was born to Lorna (Deslippe) and Patrick Milks in Maidstone Township. Shortly thereafter, his younger brother, Dwayne Joseph, arrived and together, they attended Roseland Public school and W.D. Lowe High School. At the age of 18, Chuck joined the Royal Canadian Navy, and participated in military action all over the world, including Korea. It was also during this time that Chuck discovered an affection for boxing and as an amateur boxer, won 19 straight fights. In 1951, Chuck married Lillian Ann Ninos (1929-2002) and together, they had two children, Charles Jr. (1953-2007) and Anne Marie. In 1958, Chuck retired from the Navy and joined the Royal Canadian Air Force, where he continued to pursue his military career for 15 additional years. In 1969, Chuck retired from the military and took a position in Security with Chrysler Canada. Chuck devoted 18 years to Chrysler Canada, but he still wasn’t ready to fully retire, so he continued in Security as a bailiff for Windsor County Courthouse. In 1996, Chuck was finally ready to put work behind him and start enjoying his many hobbies. Chuck loved to golf and was an active member at Roseland Golf & Country Club. He also enjoyed trap shooting as a member of Windsor Gun Club. Chuck was an avid member of the Korean War Veterans and the Newfoundland Club of Windsor. Chuck had an adventurous streak which shone through in the 70’s, when he purchased a BMW motorcycle and embarked on a solo road trip from Windsor to British Columbia. In 2006, through a chance encounter, Chuck met and fell in love with Grace Elizabeth Cole. They were married March 21, 2013, a union which generated more loving family for Chuck as he gained a stepson, Douglas Cole (Lorraine), and stepdaughter, Sharyn Bonkoski (Mark). He also inherited a crew of grandchildren, Scott (Melissa) Ryan, Marc (Nicole), Pamela, Steven, Amber(Mark), Kevin (Natalie), Kim (1971-2010) plus a host of great grandchildren, Zara, Allison, Jenna, Madeline, Liam, Kate, Paige, Grant, Mark, Sydney, Joey, Ivy, and Colby. Chuck will be forever missed, and we will always reflect on how lucky we all have been to have known and loved someone who made saying goodbye so hard. Cremation has taken place through Families First Funeral Home, and in accordance with Chuck’s wishes, burial at sea will be conducted by the Royal Canadian Navy in Halifax, Nova Scotia. A Celebration of Life will be held at The Royal Canadian Legion Branch 255 5645 Wyandotte St. E in Windsor on Saturday, June 4, 2022 from 11am until 2 pm with service at 12:00. In lieu of flowers, donations to Alzheimer Society of Canada would be appreciated.