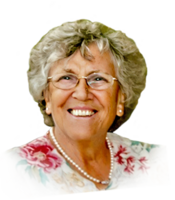 January 14, 1934 – August 28, 2021. It is with immense sadness that the family announces the peaceful passing of Johanna Reiber, on Saturday August 28, 2021, family by her side. Johanna leaves behind her son Andor Reiber (Joan), grandchildren Benjamin MacLellan, Koda MacLellan, Michael Reiber and Mary Reiber, and sister Hilde Stank, and nephews and nieces in Canada and Europe. We take comfort that she will be joining her husband Charles Reiber (1926-2012), daughter Denise Reiber (1963-2014), parents Hans and Charlotte Schmid, and brother Alfred Schmid in eternity. Born in Tübingen, Germany, Johanna survived the Second World War with her family, immigrating to Toronto Canada in 1957 at the age of 23. Through her brother Alfred, Johanna met her future husband Charlie, whom she married on October 25, 1957, building a full life in Scarborough. She worked for J. Walter Thompson Agency prior to becoming a full-time mother. Shortly after having her two children, Johanna worked at Eaton’s Don Mills part-time for many years, making many friends and colleagues. In 1968, Johanna and Charlie purchased a plot of land in Muskoka to build their dream cottage, where they would spend weekends and summers for the next 50+ years. It was their happy place. Johanna honed many skills during her life, including sewing, knitting, gardening, baking and cooking. Over time, she also learned new skills, including learning to play the piano at the Royal Conservatory of Music as an adult. She also took high school classes at Wexford Collegiate as a 50-something to brush up on her typing skills and learn word-processing, to prepare her as a trusted Executive Assistant to Eaton’s executive leadership, where she worked until her retirement. She also learned to drive in her 60s, cautiously passing her driver’s test on her third attempt after driving too cautiously on her first two tries! Johanna will be remembered for her hearty laugh, perseverance, sharp wit, clear opinions, willingness to discuss any topic, love and knowledge of classical music (all things Mozart!), and mostly for her loving nature, particularly for her family, children and grandchildren, whom she cherished. Johanna will be missed throughout the year, especially during Christmas and Easter, when the family would all get together and celebrate over her traditional German dumplings and treat baskets she put so much care into arranging. Johanna spent her final years in Amherstburg, Ontario, where she made new friends. The family thank the special people at Seasons Amherstburg and Richmond Terrace for lovingly caring for Johanna during her final years. The family is planning a virtual memorial in later September. In lieu of flowers, please consider a donation in Johanna’s memory supporting dementia research. https://dementiasociety.charityproud.org/donate